Shafaq News / Dhi Qar Health Department announced recording five suspected cases of Corona virus in the province, a few days after it was declared free of infection with the virus.

In total, the number of Coronavirus infections in Iraq raised to 26 after the Ministry of Health announced yesterday evening Monday recording five new cases, three of which were in Baghdad and two in the provinces of Maysan and Najaf.

"The health teams of our department took samples from the suspects and were sent to the Public Health Laboratory in Baghdad on Tuesday, and are awaiting the results of the examination," the director of the department, Abd al-Hussein al-Jabri, said in an interview with Shafaq News, explaining that "the five suspected cases were four people of the governorate who were on a visit to the Islamic Republic of Iran. "

Al-Jabri pointed out that "the fifth suspected case belongs to a resident of Najaf province who was on a visit to Dhi Qar Governorate," noting that "the department has sent four samples during the past weeks to the Public Health Laboratory in Baghdad for suspected persons and laboratory results have proven that they are not infected with Corona virus. "

Iraq has taken a number of precautionary measures after recording cases and deaths in the eastern neighbor Iran, including the ban on entry of Iranians to the country through border crossings, and the suspension of Iraqi Airways flights to Iran from the airports of the capital Baghdad and Najaf.

Last January, Baghdad decided to prohibit people from China from entering the country, while its citizens from Wuhan, China, evacuated the outpost of "Corona" outbreak, where they were kept for two weeks in quarantine.

Fires break out in a car shop in Baghdad 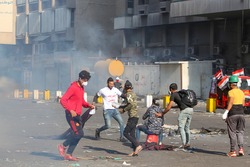