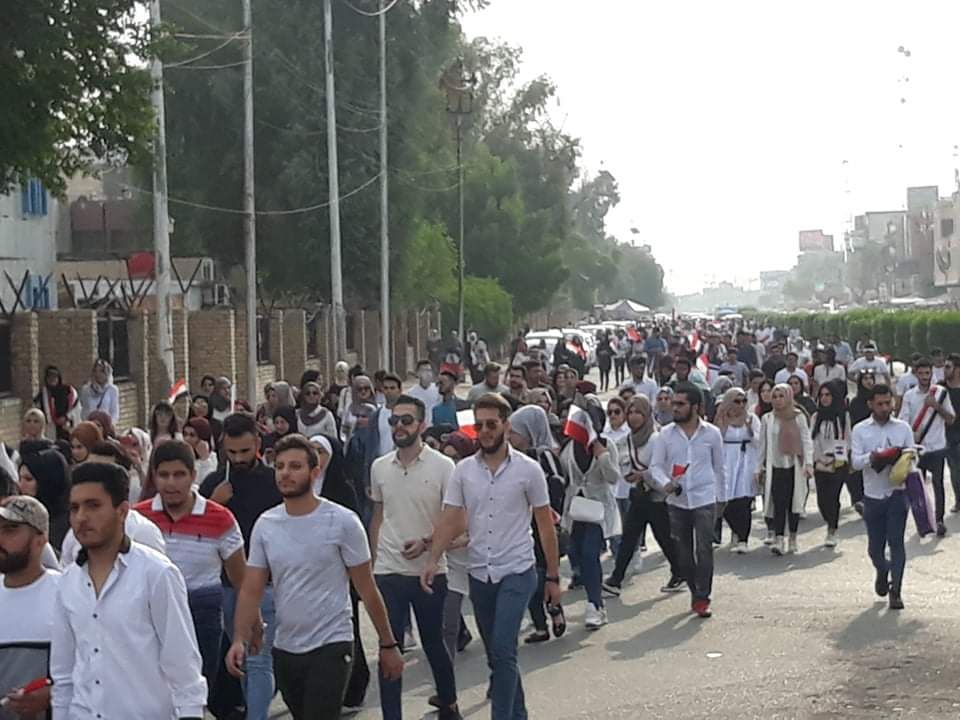 A member of the Commission ,Ali al-Bayati said in a statement today, that the riot police in Baghdad surrounded Dijla University and Al-Farahidi University and used sound bombs to disperse students.

Despite warnings issued by the Iraqi government and the Ministry of Education but school students in a number of cities and continued for the second day in a row in supporting the protests.

In Kut city, the local capital of Wasit province, students rallied in rallies despite the rains, in the cities of Basra, Diwaniyah, Nasiriyah and Amara, many students took part in demonstrations condemning the situation in the country, stressing their support for the demands of peaceful demonstrations.

"The people want to topple the regime," chanted school students at rallies in Baghdad against the government.

All students of Kufa University faculties went on strike and went to the sit-in Sadrin square in Najaf province.

While students of the University of Qadisiyah announced the strike and joined the demonstrations Diwaniya.

In A-Saouira city in Wasit province , municipal council and administrative district of the judiciary were closed.

Minister of Education ,Suha al-Ali Bey said on Sunday that trying to get schoolchildren in recent demonstrations by getting them out of schools or allowing them to demonstrate inside schools is unacceptable.

A number of students of universities and schools in Baghdad and a number of Iraqi provinces went in demonstrations yesterday, calling for reform, while others protested.

Social media broadcasted videos and photos showing marches and cheers by students in and out of their schools.

Iraq is witnessing large demonstrations in several areas of the country, which claimed hundreds of lives and injured thousands.

Hundreds gather in Baghdad to express support for al-Sadr