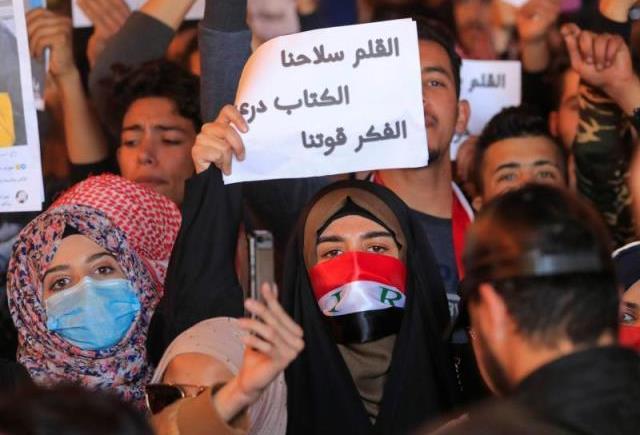 Shafaq News/ Human Rights Watch released on Wednesday a report on press freedom in Iraq quoting journalists who were exposed to "risks".

The 30-page report examines a set of legal provisions relating to defamation and incitement that the authorities use against their critics, including journalists, activists and other opposition voices, calling for Iraqi parliamentarians to replace Criminal defamation articles in the penal code provide civil defamation penalties and amend laws that restrict freedom of expression in line with international law.

The report concluded that “Mustafa Al-Kadhimi’s has an exceptional opportunity to address the restrictions imposed on freedom of expression more than ten years ago.”

It added, “A well-known TV station in Baghdad was torched by protesters after it broadcast a music concert during Ashura, a Shia holy day which was underway at the time. The offices of Dijlah TV station, which has links to Jamal Karbouli, a Sunni politician from Anbar, were badly damaged in the incident, which took place on August 31. But how have Iraqi officials since responded to this dangerous act? Not by investigating those who set the fire, but by issuing an arrest warrant for Karbouli, claiming the broadcast offended religious views under article 372 of Iraq’s Penal Code. “

“Meanwhile, three Dijlah staffers told Human Rights Watch that they have received numerous threats during phone calls and on social media, and that armed men came looking for them. The threats have now forced all of them to resign from their jobs, via public announcements posted on Facebook. But even that was not enough to stop the threats, and all three have now also fled their homes.” The report added.

“One employee said that after the governor of Diwaniyah told government departments “not to deal with” Dijlah staff, he could no longer rely on local security forces to keep him safe. In Wasit, where another of the staffers lived, the governor called on security forces to prevent anyone with a Dijlah badge from reporting from the governorate. A total of six colleagues from Dijlah have now reportedly gone into hiding. The journalists’ fears for their safety are not unfounded – four reporters have been killed in Iraq since the beginning of 2020, according to Reporters Without Borders. “

The report continued, “Earlier this month, several weeks after Human Rights Watch released a report on the growing number of prosecutions of journalists under defamation and incitement laws in the country, the Iraqi embassy in Beirut finally responded, saying that the government had formed a ministerial committee to “look into cases of assaults against journalists” back in 2016. The committee was still in operation, the embassy said, but did not provide evidence of any reports or other outputs by the body. “

“Over the last few years Human Rights Watch has interviewed over a dozen journalists who were victims of violent attacks, including by state forces, and not a single one of them knew of this committee or had ever been contacted by it. If it exists, it is clearly not taking its job seriously. After the public torching of a TV station, what more needs to happen for Iraqi authorities to take these attacks seriously?” the report interrogates.

Who will be in Al-Kadhimi's delegation to US?