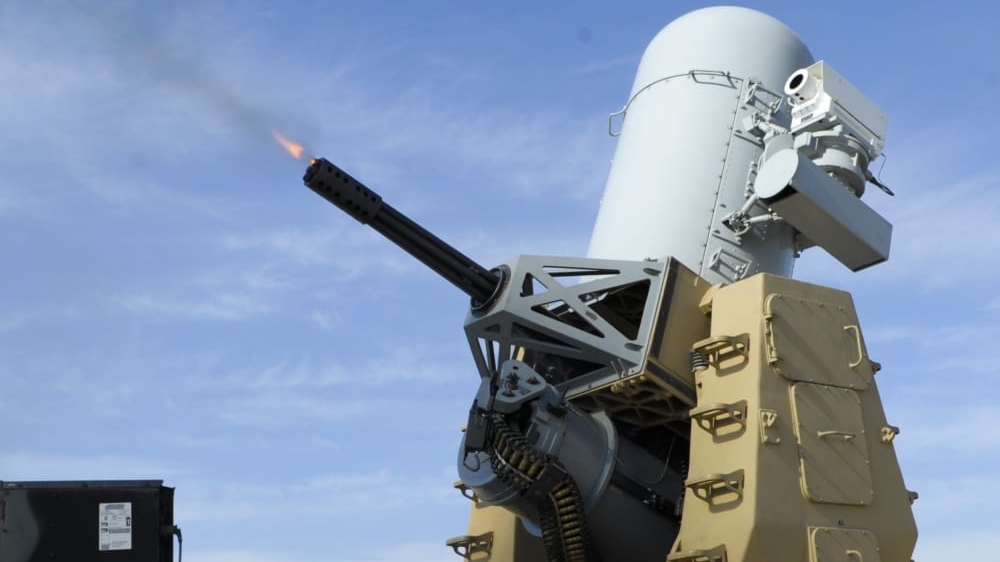 Shafaq News/ In the first week of January, the Ain al-Assad airbase situated about 100 miles west of Baghdad was the target of three separate drone attacks. One of the drones had “Revenge” scrawled on its wing; the attacks came on the anniversary of the assassination of Islamic Revolutionary Guard Corps (IRGC) Quds Force commander Qasem Soleimani, January 3.

The drone shootdowns were at first attributed solely to the US Army C-RAM (Counter Rocket, Artillery and Mortar autocannon) but the video shows that at least one of the drones was knocked out by a missile.

Israel’s top missile expert, Uzi Rubin, was one of the first to identify that a missile was part of the response to the drone attack, based on a video that first appeared on Twitter. About the same time it was spotted by Joseph Trevithick, writing in The Drive.

The Pentagon belatedly acknowledged that a missile was fired, but declined to identify the missile or the air defense system associated with it.

The two-cylinder engine has become a workhorse of Iranian and Iranian-supplied drones. Last January 23, this engine was found in the debris of a shot-down drone used in an attack on the Yamama Palace in Riyadh, Saudi Arabia. That drone was a delta-winged drone with a composite material body, probably a version of the Qasef-1 Iranian drone.

Reports at the time were that the drone was shipped from Iran in parts, assembled in northern Iraq, and then fired at the Saudi palace in Riyadh.

The larger drone used in this January’s attack was not delta-winged. It was of conventional construction with a tubular body. According to Rubin, one version of this type of drone, called the Shihab, was provided by Iran to Hamas in the Gaza strip.

Hamas describes it as a kamikaze or suicide drone and has provided a video about it. In the video the twin exhaust ports of the DLE-111 are clearly visible.

The US Army C-RAM is a multi-barreled 20mm Gatling gun that is mounted on a large extended wheeled vehicle. It is based on the navy’s now famous Phalanx gun (CIWS, close-in weapon systems, pronounced “Sea Whiz”) system, a last-resort defense against sea-skimming missiles.

A major difference is in the ammunition. Unlike the navy ammunition, the C-RAM ammunition will self-destruct after a fixed time period, thereby minimizing collateral damage from C-RAM rounds. C-RAM has a limited range – about 1,625 yards, or 1,486 meters.

At a large airbase such as Ain al-Assad, C-RAM is likely to hit a target when the target is over the airbase. The system is effective against slow-flying propeller-driven drones provided they are picked up by radar or other sensors, such as a Forward-Looking Infrared Radar.

Aside from limited range, it has two other shortcomings: it has to throw enough rounds at a drone to hit it and it may not totally destroy the drone, especially a suicide drone. C-RAM also is limited in the number of targets it can shoot at one time because of the need to assure the destruction of the first drone coming at it.

The C-RAM rate of fire is 4,500 rounds per minute. Its magazine holds 1,550 rounds. C-RAM may not be useful in a swarming drone context because it has to stay on a target until it is killed.

The only counter-drone missile available to the US Army is the FIM-92 Stinger. This is the man-portable air defense missile (“MANPADS”) that was supplied to the Mujahideen in Afghanistan to fight off Russian helicopter gunships, combat team transports and Soviet fighter bombers.

It was responsible for downing 270 Soviet and Afghan aircraft, although its success rate was only 20%, keeping in mind that the shooters were often under attack and many lacked experience.

The US Army still uses Stingers, but along with the MANPADS versions it has two air defense system models, the Avenger Air Defense System mounted on top of a high mobility wheeled vehicle (HMMWV, pronounced HUM-VEE), and the M SHORAD, an air defense system built on top of an armored modified Stryker vehicle.

The Avenger is the older system. It went into service in 1989. It can carry four or eight Stinger missiles. In 2017, an Avenger system was demonstrated taking out a drone. That test probably included a modified Stinger warhead.

The original Stinger was a hit-to-kill missile; the modification changed it to a proximity fuse, believed to be a more certain way to knock out a UAV (drone) or a cruise missile.

Because the Avenger is a “thin-skinned” and vulnerable vehicle, in the late 1990s most of them were put in storage. However, as the UAV threat grew, not only in the Middle East but along the NATO borders, many of the retired Avengers were pulled out of storage, upgraded and deployed.

There is clear evidence that Avengers have recently appeared both in Iraq and Syria, supporting US troops.

Unlike the Avenger, M SHORAD is just coming on line and seems destined primarily for NATO operations, where it gives better crew protection and has improved sensors. There also are improvements in the Stinger’s warhead and other missile components.

It is reasonable to believe that the larger Iranian drone fired at Ain al-Assad airbase was shot down by a Stinger missile fired by an Avenger system for the simple reason the US does not have anything else available there.

What isn’t at all clear is why the Pentagon has not confirmed the type of missile used.

There are many counter-drone systems, some with guns, some missiles, some lasers entering the market (such as Israel’s new Iron Beam), but the US Army apparently has not yet fielded any, except perhaps on a trial basis.

Similarly, there is considerable interest in jammers that can block command and control signals, image transmissions and GPS guidance on drones, especially cheap drones. From what can be gleaned, reading between the lines on the Ain al-Assad attacks, there were no jammers deployed there and no “exotic” kill systems either.

A particularly effective system is Israel’s Iron Dome, which works against drones and rockets. It was never deployed by the US Army except for a short time to Guam – for unknown reasons – but not to protect US or allied soldiers.

The army says it is working on an Integrated Air Defense System it can deploy to fight drones, cruise missiles and short-range Katyusha-type rockets. It will be some time before such a system is fully tested and deployed, provided it really works.

Given the proliferation of drone threats worldwide, it is hard to explain why the Pentagon has been so tardy in coming up with worthwhile countermeasures.