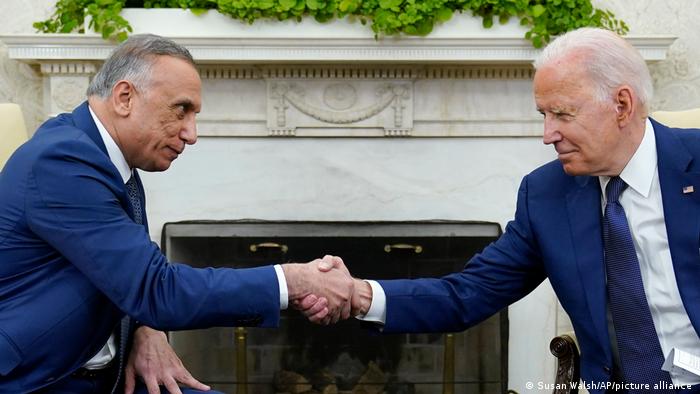 During the call, they discussed developments in Iraq after the latest incidents when supporters of the Shiite cleric Muqtada Al-Sadr stormed the Green Zone.

Biden expressed Washington's support for "an independent and sovereign Iraq, according to the Strategic Framework Agreement between the United States and Iraq."

The US president praised "Al-Kadhimi's role and wise leadership during the political tensions and recent security events," expressing his full support for these efforts.

He also praised the performance of the Iraqi security forces and extended his condolences to the families of the martyrs of Iraq.

Biden called on all Iraqi leaders to engage in a national dialogue; to find a road map to overcome the current deadlock following the Iraqi constitution and laws.

Yesterday, al-Kadhimi said he would "vacate his post" if the complicated political situation in the country continues.

Article 81 of the Iraqi constitution states that the President of the Republic performs the functions of the Prime Minister when the office is vacant, for any reason, until he assigns another candidate to form a government within 15 days.

His stance came after at least 20 people were killed and more than 200 injured in violent clashes that erupted in Baghdad's heavily fortified Green Zone following the Iraqi Shia cleric Muqtada al-Sadr's announcement that he was withdrawing from political life.

WT: U.S. to use Iraqi Intelligence to curtail drone attacks on its troops in Iraq and Syria

Al-Kadhimi meets with Biden behind the closed doors