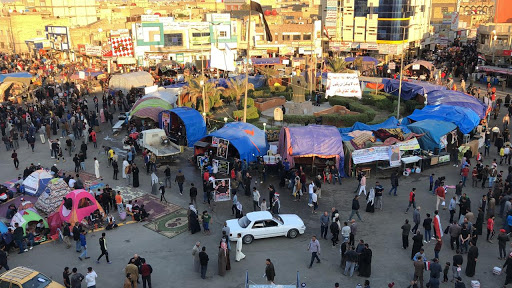 Shafaq News / A security source reported that three people were injured when a bomb exploded, on Friday evening, in Al-Haboubi Square, the gathering point of the demonstrators in Al-Nasiriyah city, the center of Dhi Qar Governorate, in southern Iraq.

The source told Shafaq News agency that a stun grenade, thrown by unidentified individuals, exploded near a tent for protesters who are camping in Al-Haboubi Square, noting that 3 protesters were injured in the blast.

This is an episode in a series of operations and assassination attempts targeting demonstrators and activists since last Friday.

Violent attacks took place in Basra earlier this week, and resulted in the death of two activists and a citizen, while other activists were subjected to assassination attempts in other governorates, including Dhi Qar.

The popular protests began in Iraq in October 2019 and are continuing in a limited way. They succeeded in overthrowing the previous government headed by Abdul Mahdi.

According to government figures, about 560 demonstrators and security personnel were killed during the protests, including tens of activists who were assassinated by unknown persons.

Al-Kadhimi's government has pledged to bring those involved in the killing of protestors and activists to justice. However, no arrest warrants have been issued so far.