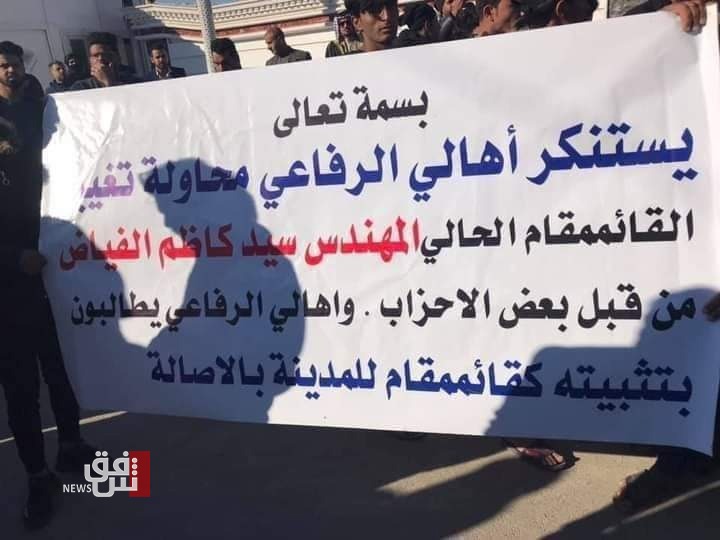 Shafaq News/ The new Deputy Commissioner of al-Rifai district, Ammar al-Rikabi, submitted on Thursday his resignation from his position only a few days after taking office.

The district located 80km to the north of Nasiriyah, the capital of Dhi Qar district, has been on hot tin since the dismissal of the former governor, Kadhim al-Fayad, and assigning al-Rikabi in lieu.

Al-Rikabi accused al-Fayad of inciting violence and revolt against the government.

The dismissed Deputy Commissioner of al-Rifai district, Kadhem al-Fayad, revolted against the decision of the interim governor of Dhi Qar, Abdul-Ghani Al-Asadi, despite replacing him.

Al-Fayad said in a statement to Shafaq News Agency, "the decision to dismiss was orchestrated without consulting the people of al-Rifai district."

"The locals reject my dismissal. As long as the people and the tribe elders stand by me, I will not surrender my post. I am here. Walking away from my duty is a betrayal to the people who entrusted me with it."

"The appointed Deputy Commissioner forged a stamp and issued some falsified orders by now. However, the original stamp is with me."

"Some demonstrators, who support the  current Deputy Commissioner, and they are a few, for some reason turned on us despite supporting and burning the streets for us before."

Al-Fayad denied fueling the protests, "only the people's support for me prompted them to do that."