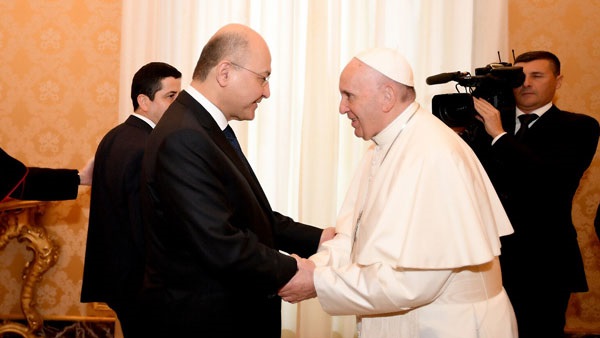 Shafaq News / The Iraqi President, Barham Salih received today Pope Francis who is on a historic visit to Baghdad.

Pope Francis will visit Baghdad, Najaf (where he will meet the leading spiritual leader of Iraqi Shia Muslims, Ali al-Sistani), Ur city in Nasiriyah, Nineveh, and Erbil, the capital of the Kurdistan region.

The Pope is currently in the Iraqi presidential palace, where an official welcoming ceremony is being held, provided that he will also meet with representatives of civil society and the diplomatic corps.

Al-Azhar: a historic and courageous visit of my brother Pope Francis to dear Iraq