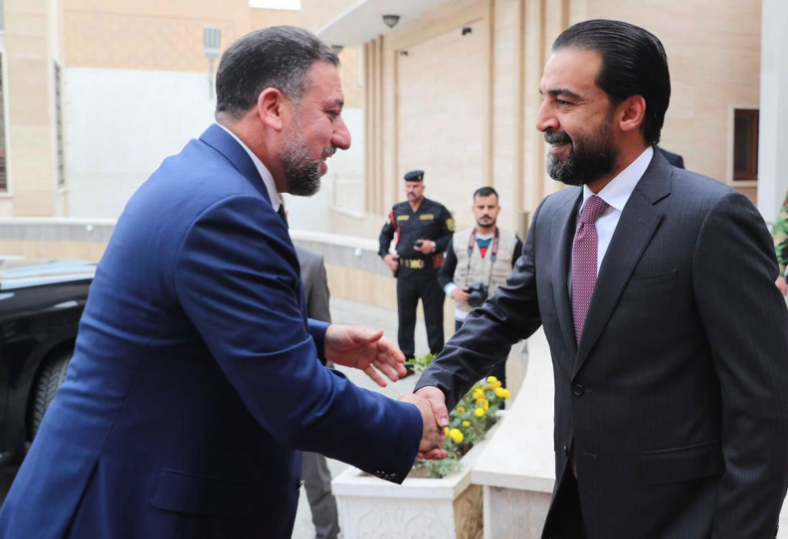 Shafaq News/ The head of al-Takaddom bloc, Mohammad al-Halboosi, will convene with the leader of the Sadrist movement, Muqtada al-Sadr, soon, a source revealed on Saturday.

The source told Shafaq News Agency that the Coordination Framework will also meet with the head of al-Azm bloc, Khamis al-Khanjar, to settle "allegiances".

Both meetings will be held in the next two days to most, the source added.

In the meeting with al-Sadr, al-Halboosi will seek establishing an alliance that fulfills the aspirations of both parties, the source said. The Speaker of the outgoing Iraqi parliament deems al-Sadr supportive of him in his quest for a second mandate. In exchange, he will pledge to endorse al-Sadr's candidate for Premiership.

On the other side, The Coordination Framework will hold an expanded meeting with al-Azm to decide the latter's position from the Shiite Consortium. "The outcomes of the meeting will be decisive for the political scene, the quality and the form of the alliances."

"The Sadrist movement boosted its toll of seats with a group of independent MPs and small blocs. According to inside information, the bloc grosses a total of around 85 seats at the moment, which enables it to lead comfortable talks with the Sunni and Kurdish forces."

Since the U.S.-led invasion that toppled minority Sunni dictator Saddam Hussein, Iraqi governments have been dominated by parties from the Shiite majority, in coalitions that have included Kurdish parties.

al-Sadr has said he will ally himself with whoever puts Iraq's national interests first. That is an indication, Iraqi officials and Western diplomats say, that he may exclude some Iran-backed Shiite groups in favor of parties with cross-sectarian support.

The elections were held earlier than scheduled in response to huge street demonstrations two years ago against corruption and foreign influence, put down violently by security forces backed by pro-Iran armed groups.

The Sadrist bloc, a political group led by populist Shiite cleric Moqtada al-Sadr, emerged as the clear winner with 73 seats in the 329-seat parliament. Al-Takaddom party, one of two main Sunni political groups and led by the speaker of the outgoing parliament Mohammed al-Halboosi, followed with 37 seats. Former prime minister Nouri al-Maliki's State of Law bloc came third with 33 seats.