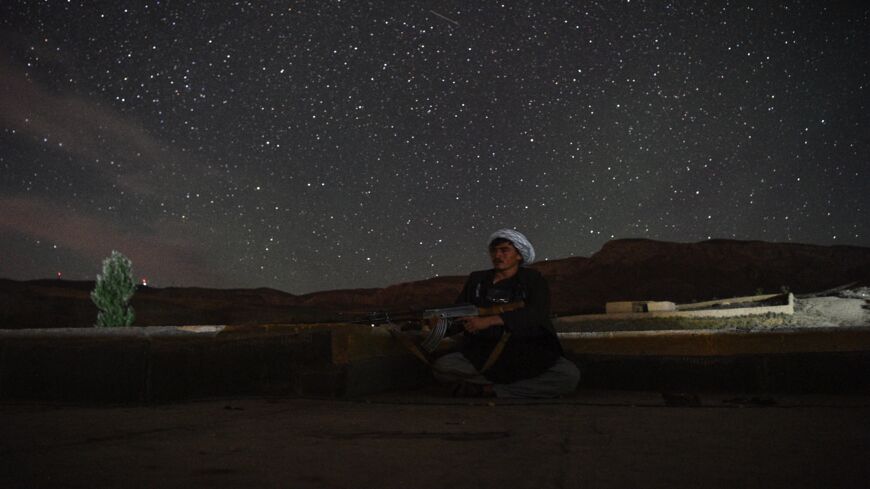 Shafaq News / Just after Maghreb prayers, tired Afghan police lugging weapons and backpacks clamber up a rocky outpost to serve as lookouts as night falls. Much of the fighting around here is done at night.

The city is the Taliban’s former stronghold and capital where al-Qaeda founder Osama bin Laden met in 1999 under the former Taliban regime (1996-2001) with Jordanian Abu Musab al-Zarqawi, whose group would later become al-Qaeda in Iraq (AQI).

At least 95% of US troops have already left Afghanistan and the rest will be out by Aug. 31.

This is in sharp contrast with the more gradual pullout from Iraq where, as one Afghan put it to this journalist, the United States didn’t abruptly yank “the patient (i.e., the country) out of the intensive care unit” before they were ready to stand on their own feet.

Districts have fallen to the Taliban at an alarming rate in recent months as the United States makes haste to get its forces out, at times even leaving in the middle of the night without informing their Afghan counterparts. The fight is far from over, and the country’s largest cities remain under government control. But the situation does not look good.

Some parts of the city of Kandahar have been taken in recent days by the Taliban, including a home of a close relative of former President Hamid Karzai.

And as more foreign fighters are reported among the ranks of the Taliban, the risks of region-wide effects grow.

According to a recent report by the UN, al-Qaeda is in at least 15 Afghan provinces and operates "under Taliban protection from Kandahar, Helmand and Nimruz provinces."

A dizzying array of foreign armed groups have at some point in recent months allegedly collaborated with the Taliban or fought under their flag in Afghanistan.

Afghan scholar Omar Sharifi, who was himself imprisoned for weeks by the Taliban in the late 1990s during their former "emirate" for not having a proper beard when he was doing his medical studies in Kabul, told Al-Monitor in an interview in Kabul in July that some of these groups made up primarily of foreign fighters have initially fought under the flag of the Taliban only to later raise their own flag.

Afghanistan under the Taliban regime in the late 1990s served as a training ground for some of those who would later join the Islamic State (IS) and for others who would train them in propaganda and the use of explosives.

Zarqawi was killed when the United States bombed his safe house in a village near the Iraqi city of Baqouba in 2006. AQI, however, served as a precursor to the Islamic State in Iraq and Syria (ISIS), formally announced in 2013.

The transnational group later dropped the “in Iraq and Syria” part of its name as it expanded internationally.

IS at one point held about a third of Syria and 40% of Iraqi territory under its control. It was declared defeated in Iraq in December 2017 and lost its last territory in Syria in the country’s eastern Deir ez-Zor province in early 2019.

It reeled in recruits from across the world, and several years after its announced defeat in Iraq, it still continues to claim attacks, including one on Baghdad’s Sadr City on July 19 that killed over 30 people.

Experts say that it has withdrawn to rural areas, deserts and mountains to try to regroup. In Iraq, however, there is potentially much less room for maneuver for jihadists than there would be in a Taliban-ruled Afghanistan.

Though the Taliban and the local branch of IS, Islamic State Khorasan Province (ISKP), have fought over territory in the country, the Taliban and al-Qaeda retain good relations.

The Taliban have also notably increased their “public messaging” over the past year. Some units are apparently now using masks and professional-looking uniforms.

A number of Afghans told this journalist over the course of several weeks spent in the country in July that people from provinces where the Taliban had taken over had seen men with masks that “don’t look or sound Afghan."

Whether they might be Arabs or Central Asians or Pakistanis — who make up a significant number of Taliban ranks, according to several security officials Al-Monitor spoke to in the Kandahar, Nangarhar and Kabul provinces — or others is unclear.

Some former Iraqi al-Qaeda members still in jihadist movements and circles — such as the former Mosul policeman Abu Maria al-Qahtani, detained in the infamous Bucca prison in Iraq for years and currently believed to be in the Syrian province of Idlib — have in recent weeks expressed support and/or praised the Taliban on Twitter.

Al-Qaeda and its affiliates and offshoots have always looked to cross borders, and a Taliban-ruled "Islamic Emirate of Afghanistan" welcome to hosting the group is likely to draw adherents from Iraq and Syria, as it did decades ago.

Two days after this journalist visited the frontline on the edges of the city of Kandahar at sundown, near which many internally displaced persons fleeing from areas recently taken by the Taliban had gathered, all phone and internet service fell dead in the city at 6 p.m.

Helicopters were heard overheard two hours later, but it was unclear what was happening. Speaking to those even a few blocks away had become impossible without physically going there. On some sides of the city, Taliban flags have been visible from the edges of the city for weeks.

Hours later, after midnight, aircraft could again be heard flying back and forth.

The inability to communicate seemed eerily reminiscent of — or to herald yet more of the same to come as — what has been seen in recent years in Raqqa, Mosul and elsewhere across the Middle East.

And though many international and some Afghan journalists have been welcomed into the Taliban’s “staged performances,” as one member of the Afghan peace negotiating team called it to this journalist earlier in July, internet service widely shut down or restricted in areas taken over by the group means scant information is available for now on who and what goes into and comes out of them.