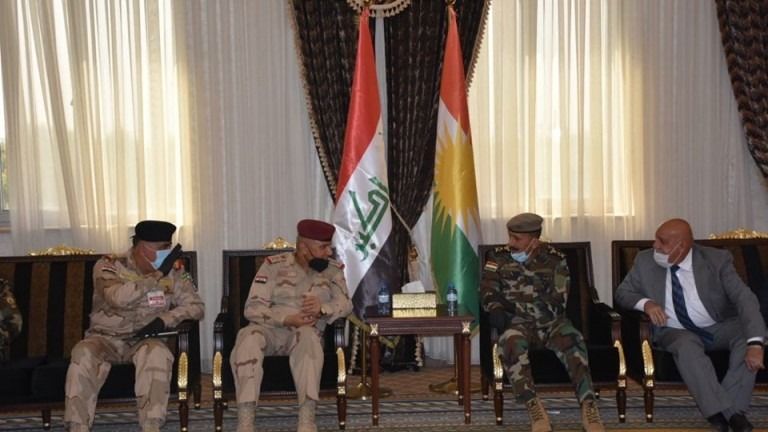 Shafaq News / The Islamic State group remains a threat seven years after it swept through Syria and Iraq, but it has not mounted any deliberate attacks on coalition forces in over two years, the U.S. military said.

This week marks the anniversary of ISIS’s slaughter of some 5,500 members of the Yazidi minority in northwestern Iraq and forced enslavement of over 6,000 others in 2014.

It’s been over two years since the terrorist group was ousted from the last of its territorial strongholds in Iraq and Syria, but it continues to exploit sectarian, political and security weaknesses in the region.

U.S. Central Command believes that the terrorists can likely “operate indefinitely in the Syrian desert” at current levels, the Defense Department Inspector General’s office said in a quarterly report to Congress published Tuesday.

“ISIS continued operating as a ‘low-level’ and ‘well-entrenched’ insurgency in rural areas of Iraq and Syria,” said the IG report, covering the period from April to June.

The group continues to use hit-and-run style attacks and roadside bombings, and it maintains cash reserves likely in the tens of millions of dollars, stated the report, which cited assessments by CENTCOM, the Defense Intelligence Agency, the Treasury Department and other agencies.

ISIS is also seeking to recruit boys at the sprawling al-Hol displacement camp in Syria and is financially backing foreign female residents of the camp who have increased radicalization efforts on social media, the report stated.

Radicalization of lone actors remains the “most serious threat” from ISIS to the U.S. homeland and Europe, the DIA told the IG.

The nearly 140-page report comes a week after a meeting in Washington between President Joe Biden and Iraqi Prime Minister Mustafa al-Kadhimi at which Biden agreed to end the U.S. combat mission in Iraq by year’s end.

Hundreds of American troops are expected to remain in Iraq to provide training, advice and support to government forces, which continue to struggle to secure the border with Syria, the IG report states.

ISIS fighters in Iraq likely have “a higher level of operational maturity,” compared with those in Syria, as suggested by their ability to carry out more complex attacks, the DIA told the IG.

In recent months, the militants have attacked electrical transmission towers and carried out bombings in urban areas, including a pair of blasts in the Sadr City neighborhood of Baghdad in April and June.

They have also long exploited a security vacuum in a rugged and remote disputed area between federally controlled territory and the semi-autonomous Kurdish Regional Government.

But in June, the Kurdish security forces known as peshmerga conducted their first joint patrol with troops under Baghdad’s command.

Calling the patrol “a milestone in the ability of the two forces to fight ISIS together,” DOD IG Sean W. O’Donnell said the two sides have also set up four new joint coordination centers in the northern provinces.

The U.S. this year resumed paying stipends to the peshmerga that were suspended last year in anticipation of a drawdown in counteroffensive operations, O’Donnell said in the report.

Meanwhile in Syria, the group has not mounted any deliberate attacks against U.S. or coalition forces since the January 2019 bombing in Manbij that killed four Americans, including Senior Chief Petty Officer Shannon Kent.