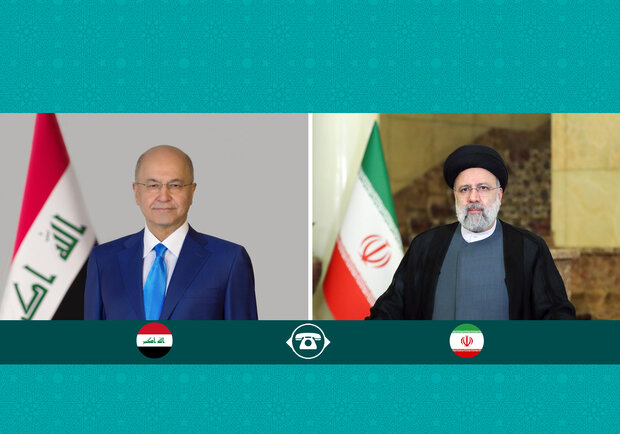 Al-Ameri: the UK intervenes in the Iraq Shafaq News/ Iranian President, Ebrahim Raisi, called for an effective and active cooperation with Iraq to establish stability and security in the region, stressing that neglecting the hegemonic goals of the United States and Israel tramples the interests of the people and brings their disdain.

Raisi's remarks came during a phone call he held earlier today, Sunday, with the his Iraqi counterpart, Barham Salih.

"We consider the slightest insecurity in Iraq to be to the detriment of the whole region, so we welcome the realization of the interests of the Iraqi people and the establishment of a strong government in this country," Raisi said according to Iranian media.

Emphasizing that Tehran and Baghdad are not just neighbors, but the two nations have a brotherly and kinship relationship, the Iranian President said, "good steps have been taken to develop and deepen relations between the two countries. We are determined to promote the level of relations and cooperation between the two countries in all fields considering all capacities. The development of bilateral and regional relations between Tehran and Baghdad will lead to closer relations at the international level."

President Salih stressed the need for cooperation between the two countries to overcome regional challenges.

"Establishing stability and security in the region is very important and we pin hope to the active role of the Islamic Republic in this regard, "he said, "Tehran and Baghdad have many commonalities and goals at the regional and international levels, and by strengthening the level of cooperation and coordination, we can take useful and effective steps to ensure the interests of our nations and the nations of the region."

The economic capacities of the two countries can serve the interests of the two nations," he said.

The US expresses commitment to supporting Iraq's security and stability