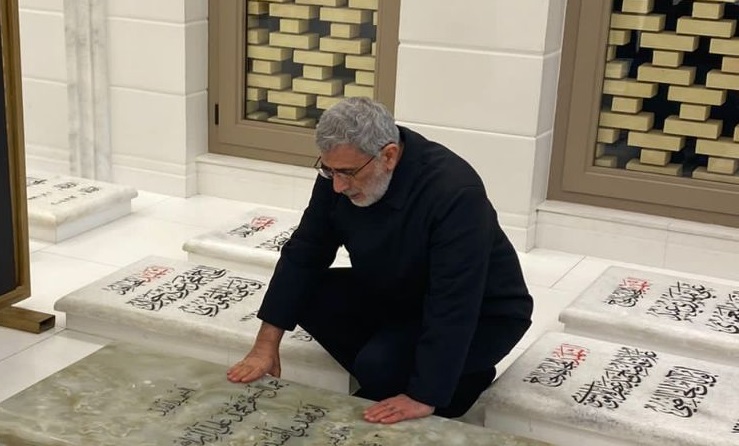 Shafaq News/ The Coordination Framework's anticipated meeting with the Sadrist movement is contingent upon the outcomes of Hadi al-Ameri's visit to the capital of the Kurdistan Region, Erbil, a source from inside the Shiite forces consortium said.

Another source told Shafaq News Agency that Esmail Qa'ani, the commander of the Quds Force-the elite clandestine wing of Iran's Islamic Revolutionary Guard Corps (IRGC), convened with the leader of the Sadrist movement, Muqtada al-Sadr, at the latter's headquarters in al-Hannana, North of Najaf.

The source said that al-Sadr was resolute about his rejection of the participation of Nouri al-Maliki, the head of the State of Law Coalition, in the next cabinet lineup.

"Qa'ani's is in a meeting with the Coordination Framework leaders at the residence of Haidar al-Abadi, the head of al-Nasr (Victory) alliance, to discuss al-Sadr's demands," the source said.

"The political formula will definitely change and the table will be turned upside-down if the anticipated meeting between the Sadrist movement and the Coordination Framework takes place and the two rivals agreed to reorganize the Shiite house together," another source stated.

"The official in charge of Iranian-Iraqi file, Qa'ani, visiting Iraq currently demanded the Framework forces to be flexible and accept al-Sadr's proposals to achieve Iraq's ultimate interests even if it is not in favor of their personal and partisan interests."

" Qa'ani partially achieved the goal of his visit. He was able to break the impasse between the Sadrist movement's leader and the Coordination Framework. The Framework will hold a decisive strategic meeting upon the return of al-Ameri from Erbil, since the Shiite forces are committed to sustaining the strategic ties with its allies, the Kurds particularly."

"The proposed scenario is annexing the 33 MPs, bar their leader, with al-Fatah (Conquest) alliance. This means that the State of Law will not be present by its name if things go as planned. The MPs of the State of Law alliance will also have their share in the government," the source added, "this scenario is the first choice at the moment."

"The entire political formula might be changed, including the Parliament Presidium. The Sunni leaders might go back to square one and grapple for the Parliament Speaker's chair," the source continued, "the next few hours, until tomorrow, might be loaded with plot twists."