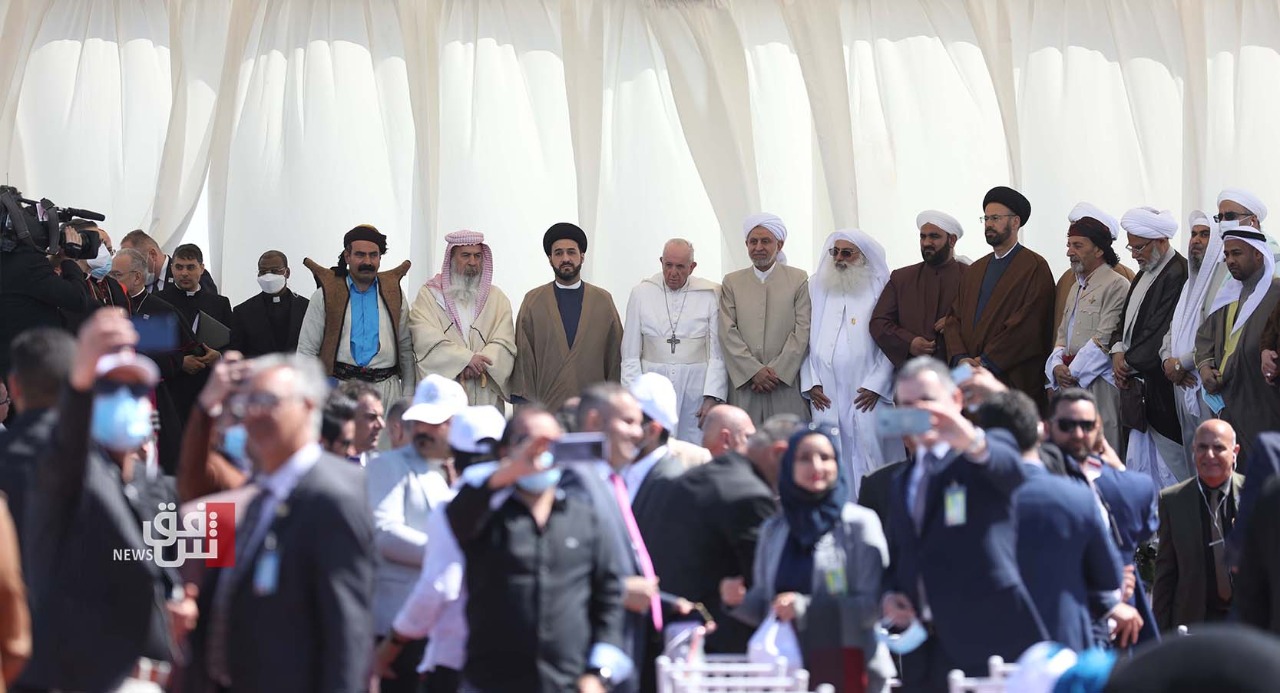 Shafaq News/ Pope Francis’ historic visit to the Middle East’s most conflict-riven nation gives hope and comfort to Iraqis of all faiths, and some would even say to Arabs beyond Iraq’s borders.

“The pope’s visit has been very well received by Muslims in the region. Did you see anyone on the news protesting against his visit? I myself am a Muslim, and we are very excited,” said Dania Koleilat Khatib, an analyst affiliated with the Issam Fares Institute for Public Policy and International Affairs at the American University of Beirut.

“I think it’s well-received by most people. There is no survey, so I can’t say how many people, but this is an impression I have,” she told the Catholic News Service by phone from Dubai.

Khatib referred to a tweet by Sheikh Ahmad el-Tayeb, grand imam of al-Azhar University and a top authority in Sunni Islam, who wished Pope Francis well in Iraq. The sheikh welcomed Pope Francis’ “message of peace, solidarity and support to all Iraqi people” and expressed hope that “his trip achieves the desired outcome to continue on the path of human fraternity.”

Both religious leaders signed a document on human fraternity and interreligious dialogue during the pope’s visit to Abu Dhabi, United Arab Emirates, in 2019.

Many Middle Eastern newspapers, such as the Saudi Arab News daily, and satellite TV stations ran live feeds of Pope Francis’ pilgrimage to Iraq, where he has urged interreligious tolerance and fraternity and rejection of violence and terrorism.

Khatib also noted the significance of the pope’s meeting in Najaf with the reclusive and revered Shiite cleric, Ayatollah Ali al-Sistani. He is followed by most of the world’s 200 million Shiites — a minority among Muslims but the majority in Iraq — and is a national figure for Iraqis who voice holds sway on the streets.

Al-Sistani issued a statement saying he “affirmed his concern that Christian citizens should live like all Iraqis in peace and security, and with their full constitutional rights.”

The Vatican said Pope Francis thanked al-Sistani for having “raised his voice in defense of the weakest and most persecuted” during some of the most violent times in Iraq’s recent history.

“We feel proud of what this visit represents, and we thank those who made it possible,” said Mohamed Ali Bahr al-Ulum, a senior Shiite cleric in Najaf.

Khatib said “al-Sistani represents coexistence with, acceptance of and respect for the ‘other.’ It is one step ahead of tolerance. The visit falls in line with al-Sistani’s line of thinking, which always seeks social cohesion and fights sectarianism, despite the immense pressure he has been placed under.”

“Sistani also says that we all have to live together and be together. This is against the politicians who are polarizing the people,” she added.

“For example, in the midst of a bloody Sunni-Shiite conflict, a group of Shiites came to him and referred to Sunnis as their brothers; he corrected them by saying: “Don’t say Sunnis are our brothers, they are ourselves,” the Lebanese Sunni Muslim analyst said of al-Sistani.

Khatib pointed to a poster featuring Pope Francis and al-Sistani with doves above their heads bearing the slogan: “We are part of you, and you are part of us.”

Iraqi Dominican priest Ameer Jaje, an expert on Shiite relations and an adviser to the Pontifical Council for Interreligious Dialogue, told CNS that “tensions exist between Shiites espousing al-Sistani’s school of thought, which opposes direct rule by clerics, the system in place in Iran, and those who are pro-Iranian and who want to impose that system in Iraq.”

Aoun Welcomes Pope Francis in the land of "civilizations, religions and cultures"

The schedule of Pope Francis visit to Iraq

The Pope's chair was stolen from Ur, a source says