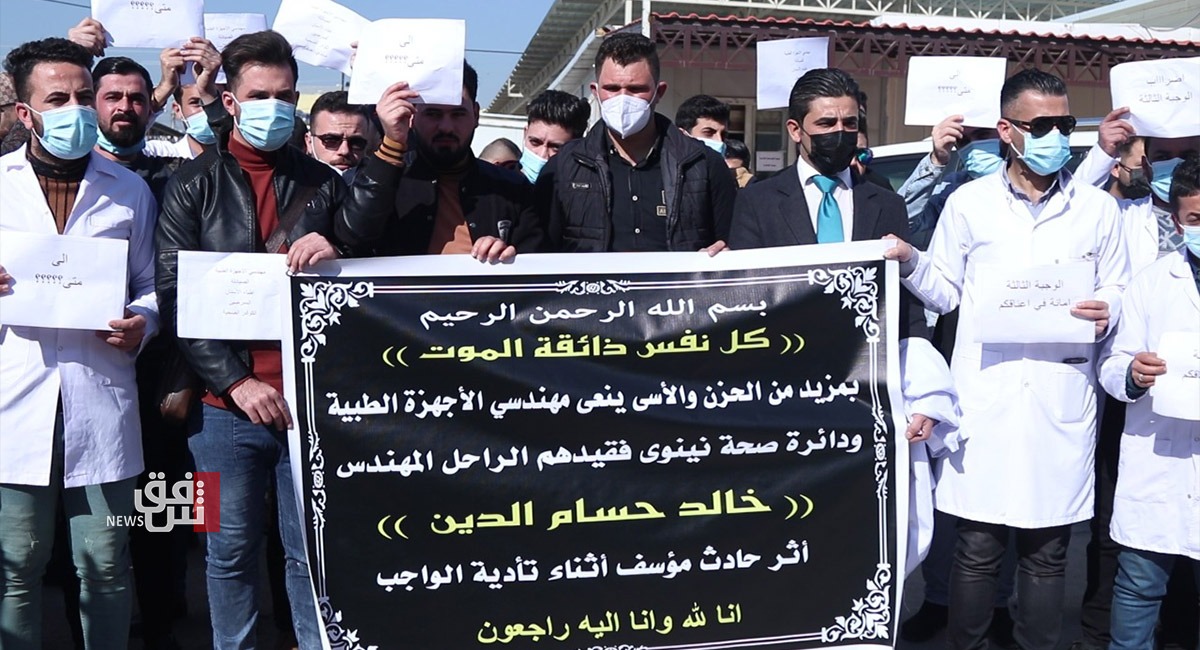 Shafaq News/ Hundreds of Nineveh Healthcare professionals demonstrated today, Monday, near the governorate's Health Department, protesting not receiving salaries since they started working at the beginning of last year.

Pharmacist Ammar Ahmed told Shafaq News agency that he and his colleagues, medical engineers, and others, have not received any salary even after 14 months.

Ahmed described the problematic situation of hundreds of his colleagues who are stricken by the financial crisis. Ahmed said that some of them started a second job after the working hours.

As for engineer Amer Abdullah, he says that his colleagues are tired of unfulfilled promises, referring to previous promises they received from the ministry.

Abdullah revealed to Shafaq News Agency that their protest might escalate to a permanent strike in the next few days, mainly because they feel resentment after losing a colleague while on duty, indicating that their deceased colleague passed away without receiving any salary.

Abdallah explained that their colleague’s death prompted most of his colleagues to opt to strike and stop working until their dues were paid.

Nineveh Health Director Dr. Falah Al-Taie said that the governorate appreciates those protesters' efforts, asserting that he is sparing no effort to secure their salaries.

Al-Taie added in a statement to Shafaq News agency that there are no financial allocations for them, and the Health Department is waiting for the approval of the budget to disburse their dues.

However, the protesters say that the health department's promises are just a spoke in the wheel, as they heard the same promise after the borrowing law, but nothing happened, "our only solution is the strike. We will not back up until we receive our salaries."

PM al-Kadhimi from Nineveh: reform starts from the base