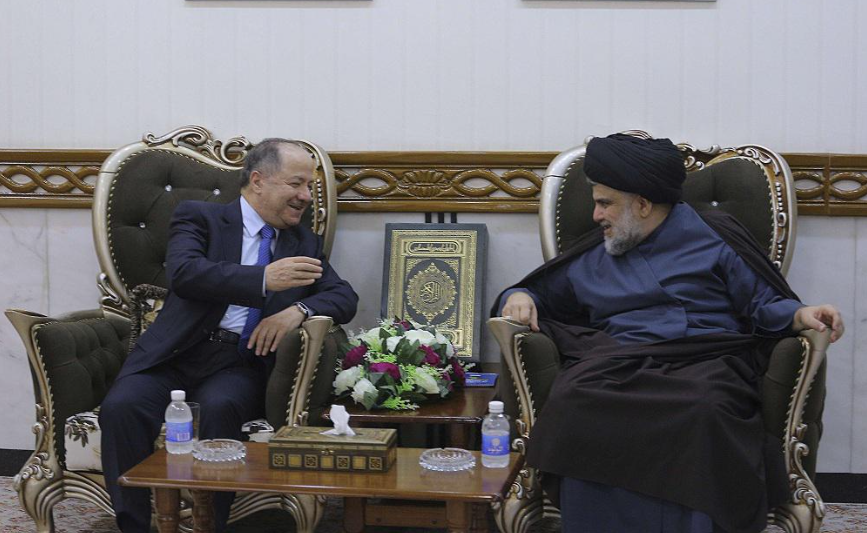 Shafaq News/ On Wednesday, the leader of the Sadrist movement, Muqtada al-Sadr, received a phone call from Kurdish leader Masoud Barzani congratulating him about forming the largest bloc and naming candidates for the presidencies of the republic and the Council of Ministers. Al-Sadr's Office said.

The Office added that the leader of the Sadrist also made calls with Muhammad al-Halbousi, Speaker of Parliament, and Khamis al-Khanjar, head of the Al-Siyada Alliance, congratulating them on "this national achievement."

Today, the Parliamentary alliance "Saving the Homeland," which is consisted of the Kurdistan Democratic Party, the Sadrist bloc, and Al-Siyada Alliance, announced their nominees officially for the Iraqi Presidency and the Prime minister.

In a press conference, the head of the Sadrist bloc, Hassan al-Adhari, said, "our candidate for Presidency is Rebar Ahmed (the Current Minister of Interior in Kurdistan), and for the position of Prime Minister is Muhammad Jaafar Muhammad Baqir al-Sadr (the current Iraqi Ambassador to London)."

"The Saving the Homeland Alliance is proceeding to form the national majority government and will complete the reform process." He said.

Muqtada al-Sadr, considered announcing the candidates of the highest positions in Iraq by the tripartite Alliance as "a unique and important achievement."

"I congratulate the Iraqi people for announcing the candidates for the Iraqi presidency and the presidency of the cabinet by the largest bloc in the parliament (Saving the Homeland)...it is a unique achievement and a mission to save the nation." Al-Sadr said on Twitter.

Al-Sadr wished to form a national majority government " capable of working by a clear government program."