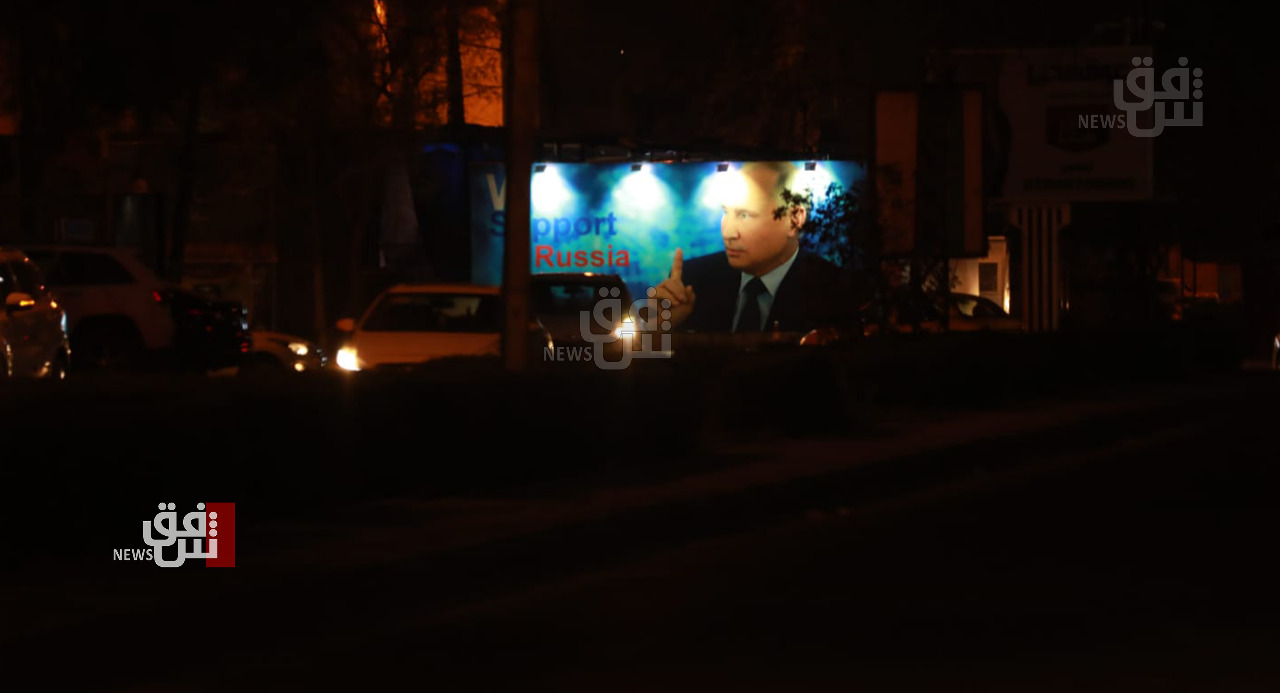 Shafaq News / A special security force managed today to remove the billboard depicting Russian President, Vladimir Putin, hours after it was erected in Baghdad, near a headquarters of Asa'ib Ahl al-Haq movement.

The billboard boasted the sentence "We Support Russia" with a large font on a bluish background. Each word in the sentence featured one of the Russian flag's three colors.

The huge Billboard appended by the signature of "the President's friends" was set up near a headquarters of the Asa'ib Ahl al-Haq movement in al-Jadiriyah area on the road leading to the University of Baghdad.

Since Thursday, Ukrainian forces have been battling Russian forces on three fronts after Moscow unleashed the biggest attack on a European state since World War Two, prompting tens of thousands of people to flee their homes.

After Russian President Vladimir Putin declared war in a pre-dawn televised address, explosions and gunfire were heard through the day in Ukraine's capital and elsewhere in the country.

The invasion has yet to achieve the Russian President's aim of overthrowing Ukraine's government, but it has sent more than 870,000 people fleeing to neighboring countries and jolted the global economy as governments and companies line up to isolate Moscow.

The United Nations General Assembly voted overwhelmingly to deplore the invasion "in the strongest terms". It demanded that Russia withdraw its forces in a resolution backed by 141 of the assembly's 193 members.

In the conflict that is heading toward the end of its first week, the EU and the US clearly support Ukraine, though thus far mostly with statements and sanctions. Thousands of US troops have been sent to Poland, Germany and Romania.

However, Syria, Iran, and China instead back Russia.

Many Iraqi positions on the invasion have thus far been mild, with calls for the UN and “the international community” to take action.

The head of the Hikma Movement, Ammar Hakim, wrote on Thursday that the conflict between Russia and Ukraine "heralds a major global crisis that is difficult to contain." He called on the international community, the United Nations and the Security Council to take urgent steps to encourage negotiations.

Russia holds a permanent position at the UN Security Council and veto power, which some claim it should be stripped off.

The popular Iraqi cleric Muqtada al-Sadr, whose political alliance got the most support in the October 2021 elections, wrote on Twitter before the start of the Russian operation, "I am still looking forward to the principle of dialogue prevailing between the two Christian neighboring countries" and that war is "absolutely useless."