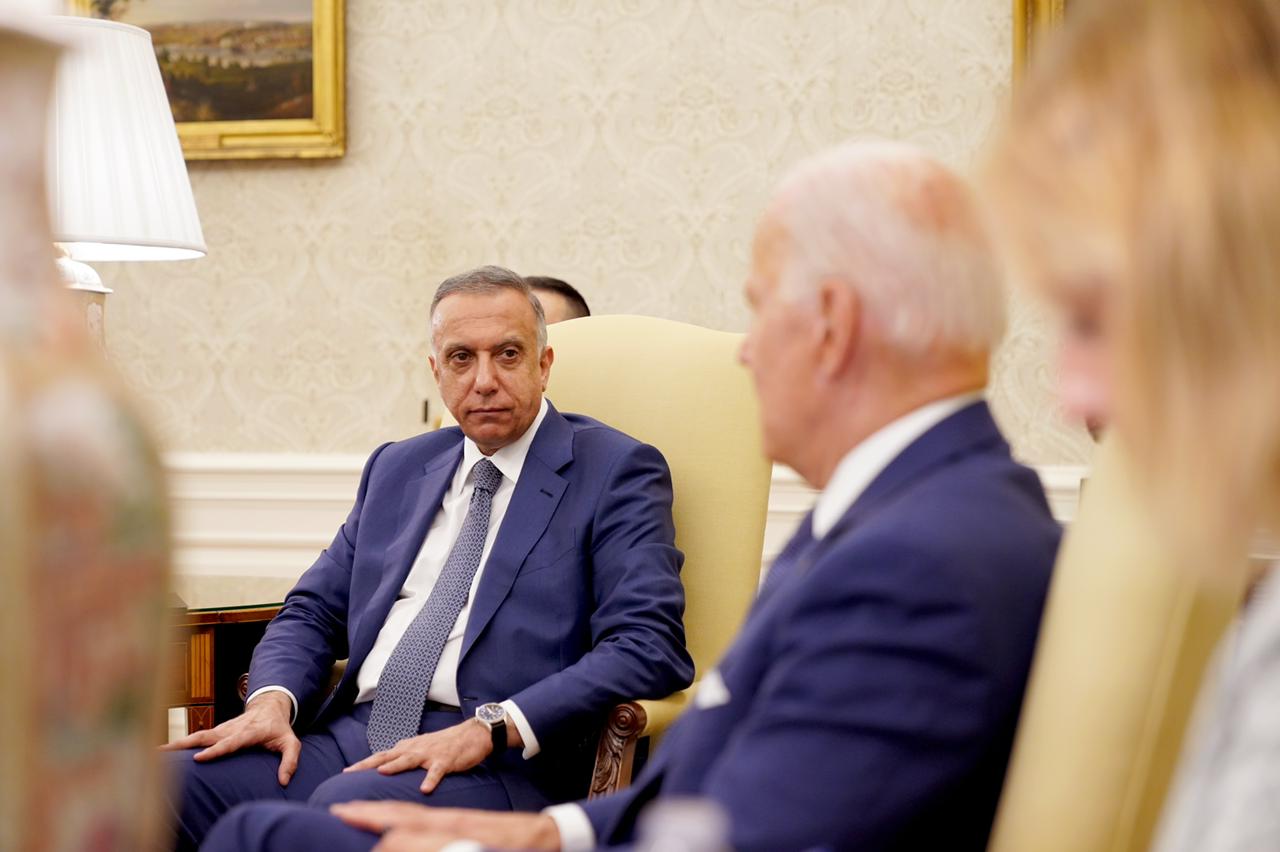 Shafaq News/ Iraq’s Prime Minister Mustafa Al-Kadhimi has ended, on Thursday his visit to Washington, announcing details of the US withdrawal from Iraq.

“Concluded a great visit to Washington DC, and had fruitful discussions with President Joe Biden on various avenues of cooperation including economy and security,” Al-Kadhimi said on Twitter.

“I look forward to continuing our work together and enhancing Iraq-US partnership for the benefit of our peoples.” He added.

The U.S. President hosted the Iraqi Prime Minister Mustafa al-Kadhimi at the White House on the 26th of this July and discussed several issues of common interest.

The visit was a part of the Iraqi-American strategic talks to frame the relations between the two countries.

U.S. President Joe Biden and Iraqi Prime Minister Mustafa al-Kadhimi sealed an agreement formally ending the U.S. combat mission in Iraq by the end of 2021, but U.S. forces will still operate there in an advisory role.

About 2,500 American soldiers are deployed in Iraq to fight the ISIS organization.

The "Al-Fatah" led by Hadi Al-Amiri, whose Iran-backed alliance is the second-biggest political force in parliament said in a statement that it "welcomes the national achievement of the Iraqi negotiator by agreeing to the complete withdrawal of the US combat forces at the end of this year.”

For his part, the Victory (Al-Nasr) Coalition, led by former Prime Minister Haider al-Abadi, welcomed the results of the 4th round of the Iraqi-American strategic dialogue, noting in a statement that the outcomes are a result of the efforts of the Al-Kadhimi government supported by national forces.

In turn, the leader of the Wisdom (Al-Hikma) Movement, Ammar al-Hakim, said the Prime Minister and the Iraqi negotiating delegation succeeded, with the support of the political forces, “in-reach a diplomatic achievement for the country.”

Muqtada al-Sadr, the leader of the Sadrist movement, the largest political bloc in the Parliament called for “stopping the military operations of the "resistance" against the US forces after fulfilling their promise and will withdraw from Iraq.”

He added, "Thank you for the efforts made to achieve this agreement, especially of Brother Al-Kadhimi."

For its part, Asa'ib Ahl al-Haq Movement, led by Qais Khazali, said, "We do not deal with statements and media news, but rather with the outcomes and their implementation of the agreement," noting that "we still adhere to the conditions of the Resistance Coordination Commission, which are the necessity of a real and complete withdrawal of soldiers, aviation, and bases.”

He added, "There are doubts and fears that what was agreed upon in Washington will not be implemented on the ground. We do not have any confidence in the American administration. It cannot be said that there is a withdrawal without implementing the agreement correctly and completely."

The Movement confirmed that "the Iraqi resistance factions will suspend their military operations if their conditions are met with a complete and real withdrawal. Otherwise, military operations will continue…the Factions will now give time to implementing what was stated in the agreement between Al-Kadhimi and Biden…we are monitoring and following up the situation."

In this regard, a political source told Shafaq News Agency that, "the leaders of the Resistance Coordination Commission are holding continuous meetings to take an official and unified position on the US-Iraqi agreement."