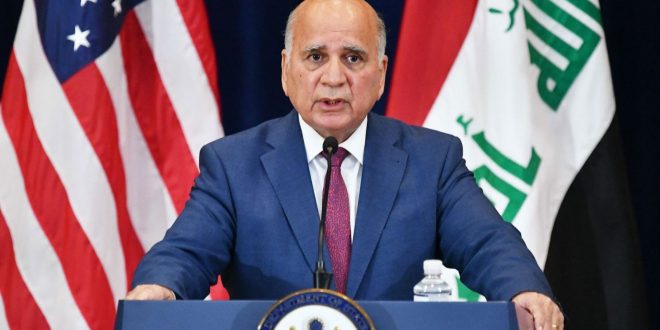 Hussein said in a speech; Today,” we are in the American capital, Washington…to hold the work of the Supreme Committee of the Strategic Agreement between the Republic of Iraq and the United States of America...”

Hussein indicated that this round of dialogue comes is following the previous three rounds, noting that "these sessions represent the serious will of both countries to reach common understandings for cooperation in various sectors.”

He continued, "Last June, we participated in the ministerial meeting of the Global Coalition, which was held in Rome, and we conducted dialogues with all parties, during which Iraq affirmed its full commitment to ensuring the defeat of the terrorist organization Daesh..."

Hussein pointed out that "Iraq appreciates the efforts made by the US government to rehabilitate and train the Iraqi security forces, and to provide equipment and advice in the intelligence field ... in a way that enhances Iraq's sovereignty and security," noting that "Iraq today affirms the importance of the international efforts led by the United States as it represents, in parallel with the (Iraqi) military efforts, a victory over the ideology of injustice and hatred that terrorism is trying to spread in societies.”

He stressed that "our security forces still need the programs provided by the United States, related to training, arming, equipping, and capacity-building, and we seek to continue bilateral security coordination and cooperation," affirming "the commitment of the Iraqi Government to protect the personnel of diplomatic missions, their headquarters and facilities, and to ensure the security of the Iraqi military bases that host International Coalition Forces.”

On the elections, Hussein said, "The Iraqi government is moving confidently to holding the elections on the 10th of next October, and to establish a safe environment for voters to achieve free and fair parliamentary elections and restore their confidence in the democratic process in Iraq."

Hussein praised; the efforts of the international community, through the United Nations, to observe the upcoming election process," we thank the countries that have supported Iraq's request to provide the observation on the elections to ensuring their integrity.”

The Iraqi Foreign Minister confirmed that Iraq has continued to strengthen its economic independence and achieve regional and international partnerships, the latest of which was the Tripartite Summit initiative with Jordan and Egypt, as well as efforts to link Iraq to the regional energy system across the Gulf states.

He pointed out that "the Iraqi government is also continuing its efforts to end the injustice that hARM our multi-component society, as the Iraqi Parliament has enacted the Yazidi Survivors Law, that has a great impact in supporting the victims of the terrorist organization and ensuring that its members are held accountable for the criminal acts committed against innocent citizens, along with The government’s steps, in cooperation with international partners, to promote dialogue and societal peace, reject violence and extremism, respect religious, sectarian, ethnic and national diversity in Iraq, and reject forms of discrimination as affirmed by the Iraqi constitution.”

He referred to the efforts of the Iraqi government to reach an agreement in Sinjar to maintain security in it in cooperation between the federal security forces and the Peshmerga forces, as many joint security centers were established in areas where the terrorist organization Daesh is active, as well as the efforts of the Iraqi government and in coordination with international organizations to ensure voluntary return. for the displaced.

Hussein renewed; Iraq's commitment to strengthen economic partnership, investment, and joint action in all sectors, which are included in the Strategic Framework Agreement with the United States, with a commitment to respect Iraq's sovereignty.