Iraq calls on Austria to reopen its embassy in Baghdad 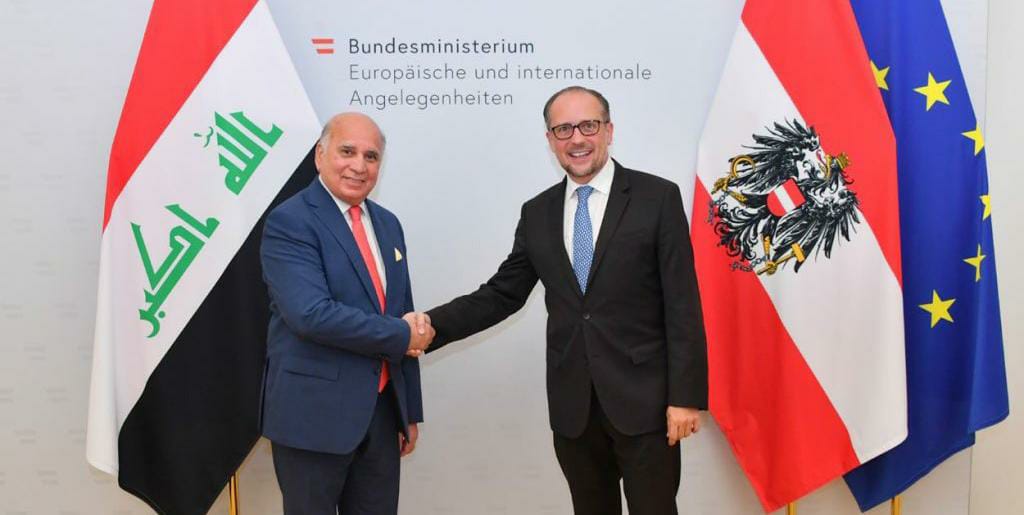 Shafaq News/ The Iraqi Ministry of Foreign Affairs called on the Austrian government to reopen its embassy in the capital, Baghdad.

This came during a meeting, yesterday, between Iraqi Foreign Minister Fouad Hussein, with his Austrian counterpart Alexander Schallenberg, in Vienna, where they discussed ways to enhance bilateral relations between the two countries.

The two sides reviewed the latest developments throughout the region, and the need to intensify dialogue, efforts, and cooperation to eliminate terrorism and restore security and stability to the region, according to a statement issued by the Iraqi Foreign Ministry today.

The statement said that the two ministers, "discussed Iraq's active role in bringing the views of regional neighbors closer to resolving problems of mutual interest, and moving from the stage of disagreements to the stage of economic cooperation and partnerships in a way that serves security and stability in Iraq and the region."

The two parties shed light on the efforts of the Iraqi government and its diplomacy in holding the Baghdad Conference which was recently held.

For his part, the Austrian minister commended Iraq's pivotal role in the region and the importance of its continuity, stressing that Austria, as part of the European Union, strongly supports this role.

The statement quoted Minister Hussein saying that Iraq's foreign policy is based on the balance in its relations with other countries noting that Iraq was able to establish a platform for dialogue, as Baghdad turned into a center for communication and positive interaction.

He pointed out that the government is putting all efforts to develop the economy and multiply financial resources by activating the agricultural, industrial, and tourism sectors.

The two sides also discussed holding the upcoming Iraqi elections under international and European observation, and the need for cooperation in the security field to confront ISIS terrorist cells in Iraq. They also reviewed the Iraqi immigrants' file and the Iraqi government's measures in this regard.

Hussein expressed Iraq's keenness to enhance cooperation, coordination, and political consultation on regional and international issues of mutual concern, and resuming meetings of the Iraqi-Austrian Joint Committee to activate the joint work between Baghdad and Vienna.

Hussein praised Austria's supportive stances for Iraq in various fields, including their contribution to the reconstruction of liberated cities, calling for the reopening of the Austrian embassy in Baghdad.

Schallenberg expressed his country's aspiration to strengthen bilateral relations with Iraq, noting that Vienna is ready to support Iraq in achieving security, stability, and reconstruction.

Two explosions in the east of Baghdad