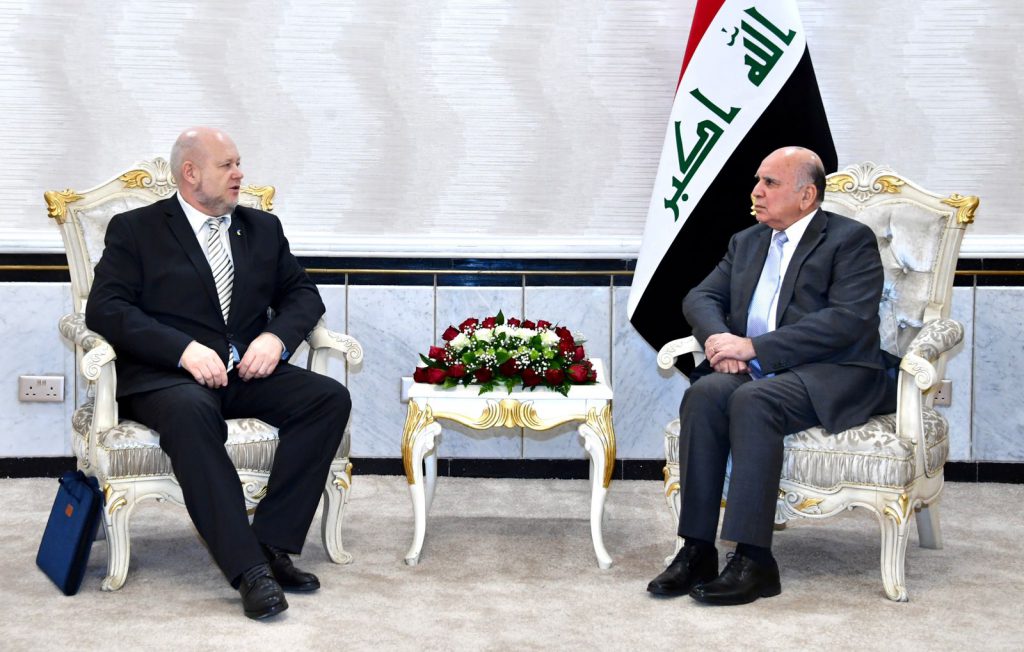 Shafaq News/ Iraq's Minister of Foreign Affairs, Fuad Hussein, on Sunday, expressed his country's grave concerns at the ongoing humanitarian crisis in Ukraine, reiterating its support for the endeavors aiming at easing the tension and ending the military operations.

Hussein received the charge d'affaires of the Ukrainian embassy to Iraq, Alexander Borvzhnikov, in the headquarters of the Foreign Ministry downtown the Iraqi capital, Baghdad, on Sunday.

According to a readout issued by the Ministry, Hussein discussed with his guest the bilateral ties between Baghdad and Kyiv, the impact of the Russian-Ukrainian war on the humanitarian situation in Ukraine, and its reverberations on the world's security, stability, and economy.

The Ministry called for pursuing dialogue to defuse the crisis, and preserve the safety and security of the Ukrainian people.

"Iraq has suffered the scourge of war. Therefore, it opposes the war and economic embargos because it affects the people," he said, "it, however, endorses all the efforts aiming at easing the tension and end the military operations."

The Minister laid emphasis on "self-restraint, respecting the principles of the international law and United Nations charter, and the state's sovereignty on its land," highlighting the efforts of Iraq and the Arab states to build bridges between Russia and Ukraine.

The Ukrainian diplomat commended the efforts of the Iraqi embassy and thanked Iraq for the aid it had provided.

According to a readout issued by the Ministry, Hussein discussed with his guest the bilateral ties between Baghdad and Moscow and cooperation prospects between the two nations.

"Iraq has suffered the scourge of war. Therefore, it opposes the war and economic embargos because it affects the people," Hussein said, "the war in Ukraine will lead to a further rise in foodstuff prices, particularly in consuming and non-oil countries."

The Minister highlighted the efforts of the Arab countries with both Russia and Ukraine to establish a ceasefire and start peace talks.

Al-Kadhimi: we support ending the Russian invasion of Ukraine