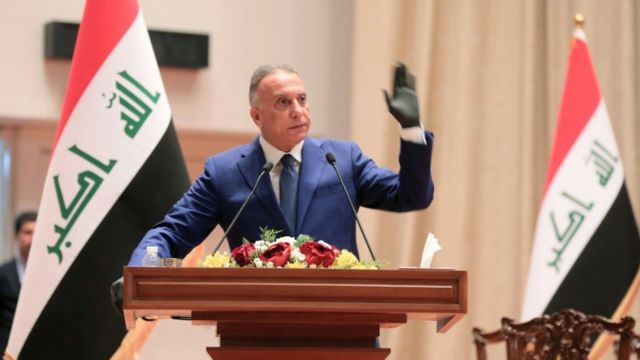 Shafaq News/ The Iraqi caretaker Prime Minister, Mustafa al-Kadhimi, warned of exploiting the "complexity of the political situation in Iraq" to sow chaos.

Al-Kadhimi's remarks came during his visit to the turbulent southern governorate of Maysan earlier today, Wednesday, in the aftermath of an anti-narcotic magistrate last weekend.

The Prime Minister said the entire spectrum of political, security, and social forces shall join efforts to tackle the phenomenon of chaos and take swift actions to address its reverberations.

Al-Kadhimi, who pledged a full-swing battle against crime in the southern governorate, said that he instructed the security authorities to form an operation command in Maysan and devise a comprehensive plan to "address the breaches".

"I will personally follow up the situation of the governorate with the Joint Operations Command day by day. The criminals shall be caught and brought to justice," he continued, "nobody is above law."

"We will provide the necessary support for the Judicial and security authorities to enforce the law in Maysan," he said.

Al-Kadhimi voiced rejection to "exploiting the local scene for political agendas and transforming the country into an arena to settle scores that sometimes root from outside the country."

"The stability of Iraq is a cornerstone for regional stability. The chaos in Iraq propagates to the region. Nobody wants that," he said, "dragging troubles into Iraq or wreaking them in this or that governorate is something we categorically refuse."

"Plunging Iraq into similar confrontations, whether internal or external, at this critical juncture is detrimental to all of us," he concluded.

Flanked by the ministers of Interior and Defense, the Iraqi caretaker Prime Minister arrived in Amara, Maysan's capital city, this morning; only a few days after Judge Faisal killing on Saturday evening in the area infamously known as a trafficking hub.

The magistrate specialized in narcotic-related cases was heading home in Amara when a group of unknown assailants blocked his route and sprayed his vehicle with bullets.

Judge Faisal assassination elicited a shake up in the security hierarchy of Maysan. Yesterday, the head of the Nation Security Agency, Hamid al-Shatri, relieved the governorate's chief security officer of from his duties, according to a brief statement by the Security Media Cell (SMC).

Today, the Iraqi Prime Minister, Mustafa al-Kadhimi, ordered forming an Operation Command for Maysan and appointed Major-General Mohammad al-Zubaidi in charge of it.

Al-Kadhimi commemorates the anniversary of the Defensive Jihad Fatwa