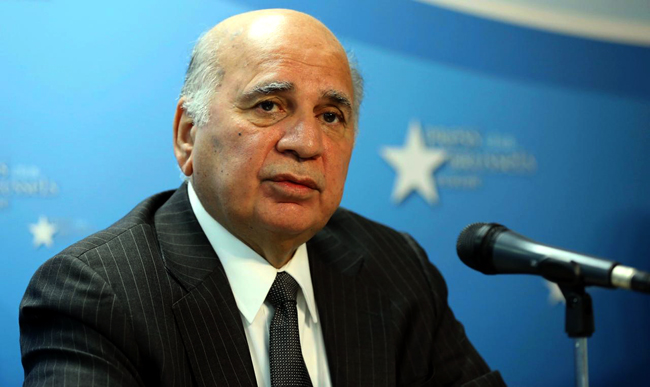 Shafaq News / On Thursday, the Iraqi Foreign Minister, Fouad Hussein called on neighboring countries to respect the sovereignty of Iraq and not to interfere in its affairs, warning that ISIS is trying to re-organize in Iraq, Syria and some African countries.

Hussein said during his hosting by The Press Club Brussels Europe in Belgium, which is the second visit in his official tour in several European countries, "Iraq is looking forward to expand its relations with European countries and cooperate with them in all fields," calling on European companies to invest in particular  In the field of energy, and the oil and gas industries in Iraq.

Hussein pointed out that "Iraq seeks to find balanced relations with neighboring countries, and not to use its territory against any of them," stressing "the need to respect the sovereignty of Iraq and not to interfere in the internal affairs."

In response to the questions of a number of journalists, the Iraqi minister touched on the developments of the political and security situation in Iraq, noting that "Iraq has faced several challenges, including terrorism, the drop in international oil prices, and the face of the Corona pandemic."

And "we are trying to deal with the Coronavirus in cooperation with different countries," pointing out that "the decline in oil prices has led to something similar to the economic crisis."

On the security issue, Hussein warned that "the terrorist organization ISIS is still a threat to Iraq, neighboring countries and the whole world, and they are trying to reorganize themselves in Iraq, Syria and some African countries."