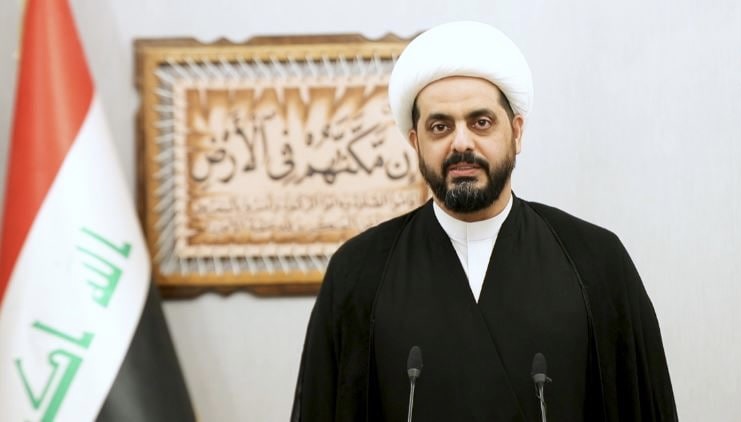 On Monday, Muqtada Al-Sadr's supporters stormed the government palace in Baghdad's heavily fortified Green Zone, and a clash erupted between Saraya al-Salam (Affiliated with Al-Sadr) and the Iraqi security forces.

"Yesterday and today is the worst night we have had since 2003. We have reached the stage of threatening the state." Al-Khazali said.

"Armed groups stormed the streets in most central and southern governorates. These groups used various weapons and terrified the citizens. Some of them surrounded the oil fields in Basra and Nasiriyah, which is considered an economic threat." Secretary-General of Asa'ib Ahl al-Haq added.

Al-Khazali, the prominent leader in the Shiite Coordination Framework, stressed the necessity to "obey the orders of the (Religious) references because they are the most knowledgeable and insightful."

He said that the Commander-in-Chief of the Armed Forces, PM Mustafa Al-Kadhimi, "did not play his role in maintaining security and stability," calling for "the need to hold accountable all who violated the law and opened fire at the security forces."

He believed that "the situation we are experiencing is awful. Parliament and government works are suspended; therefore,  resuming the Parliament sessions and forming a government by constitutional contexts are in need."

Al-Khazali's statement comes after at least 20 people were killed and more than 200 injured in violent clashes erupted in Baghdad's heavily fortified Green Zone, following an announcement by the Iraqi Shia cleric Muqtada al-Sadr, that he was withdrawing from political life.

Later, the armed supporters of Al-Sadr, who clashed with security forces in the capital, began to withdraw from the streets, restoring calm after a severe escalation of the nation's political crisis.

"This is not a revolution [anymore] because it has lost its peaceful character," al-Sadr said in a televised address.

"The spilling of Iraqi blood is forbidden," he added.

Protesters supporting al-Sadr's rivals also withdrew from their demonstration outside the government zone.