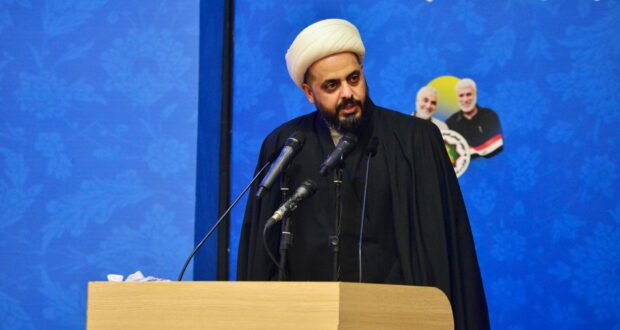 Shafaq News/ The leader of the Asa'ib Ahl al-Haq movement, Qais al-Khazali, stressed that the Coordination Framework will not take part in a cabinet that ostracizes one of its member-parties.

Al-Khazali's remarks came during a speech he delivered in a memorial ceremony organized by the National Congress of the Fayli Kurds in the Iraqi capital, Baghdad, earlier today, Sunday.

Al-Khazali accused Britain of "elaborating intelligence plots" to undermine the status of Iraq. He also took an aim at the United Arab whose "bad role in the region in general, and Iraq in particular, is well-known to everyone."

"We do not doubt the fidelity of the contesting parties. However, some parties are making many efforts to incite strife," he said.

The leader of the Iran-aligned movement added, "the resistance factions have nothing to do with the attack on the Green Zone."

Last week, the leader of the Sadrist movement on Tuesday said that he would not share a cabinet with the head of the State of Law Coalition, Nouri al-Maliki.

Al-Sadr said in a televised interview, "I invited Hadi al-Ameri [head of al-Fatah (Conquest) alliance], Qais al-Khazali [the Secretary-General of the Asa'ib Ahl al-Haq movement], and Falih al-Fayyadh [the head of al-Aqd al-Watani (National Contract) bloc, to participate in the national majority government, without al-Maliki, but they refused."

Qa'an arrived in the Iraqi capital, Baghdad, on an unannounced visit to resume the talks over the formation of the Iraqi government amid an ongoing row between the Sadrist movement and the Coordination Framework. Media reports said that he was scheduled to meet al-Sadr.

Garnering the support of the leading Kurdish party (Kurdistan Democratic Party-KDP) and the two leading Sunni blocs (Takaddom and Azm), the bloc of the firebrand Shiite cleric -the biggest in the October 10 election- has been mobilizing impetus behind a "National Majority Government", challenging the status quo "consensus governments", which the forces of the Shiite Coordination Framework have been lobbying for.

Will the tables turn on the Sadrist leader? The Coordination Framework on a mission to round corners in Erbil