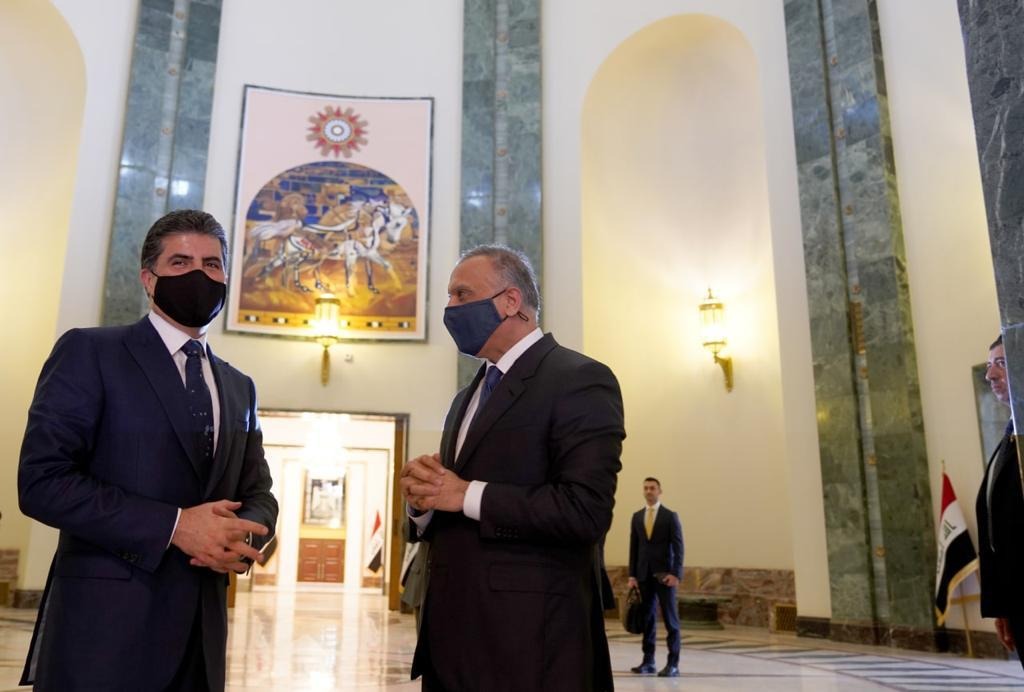 A readout of the meeting issued by the Federal Prime Ministry said that al-Kadhimi discussed with his host files related to enhancing the cooperation and integration between the departments of the Regional and Federal governments in accordance with the constitution, efforts to fight crime, and terrorism, and Sinjar agreement.

The meeting touched upon the Coronavirus pandemic, the huge efforts to provide care to ill citizens and roll out vaccination plans.

The Prime Minister appraised the progress of the Federal Institutionalization endeavors, hinting at the passing of the Federal Supreme Court and the Federal Budget laws. Al-Kadhimi hoped that the provisions of the approved acts would be distanced from mazes of construing that hampers with services and violates the fair distribution of resources.

Al-Kadhimi stressed the importance of bolstering the security cooperation between Baghdad and Erbil to maintain internal stability and prevent security gaps that terrorism or crime can exploit inside and outside the disputed territories.

The head of the Iraqi Council of Ministers said that President Barzani's visits to Baghdad sends positive signals to all Iraqis, contribute to extending outreaches, spurs the spirit of cooperation and coordination at all levels, hinting that he intends to visit the Kurdistan Region soon.

For his part, President Barzani expressed gratitude for the warm welcome, appraising the Prime Minister's efforts on the political, economic, and diplomatic level.

Barzani stressed that al-Kadhimi's recent visit revealed the deserved status of Iraq and restored its role in the region.

The President of the Region lauded the wise approach of al-Kadhimi towards the internal issues and the high level of security cooperation, emphasizing his support to the Federal Government and the prestige of the state.

Barzani congratulated passing the budget law by the Parliament, affirming that settling the disputes between Baghdad and Erbil paves the way towards stability and progress.

Al-Kadhimi responds to "demonization attempts", and reiterates his position of unlawful arms