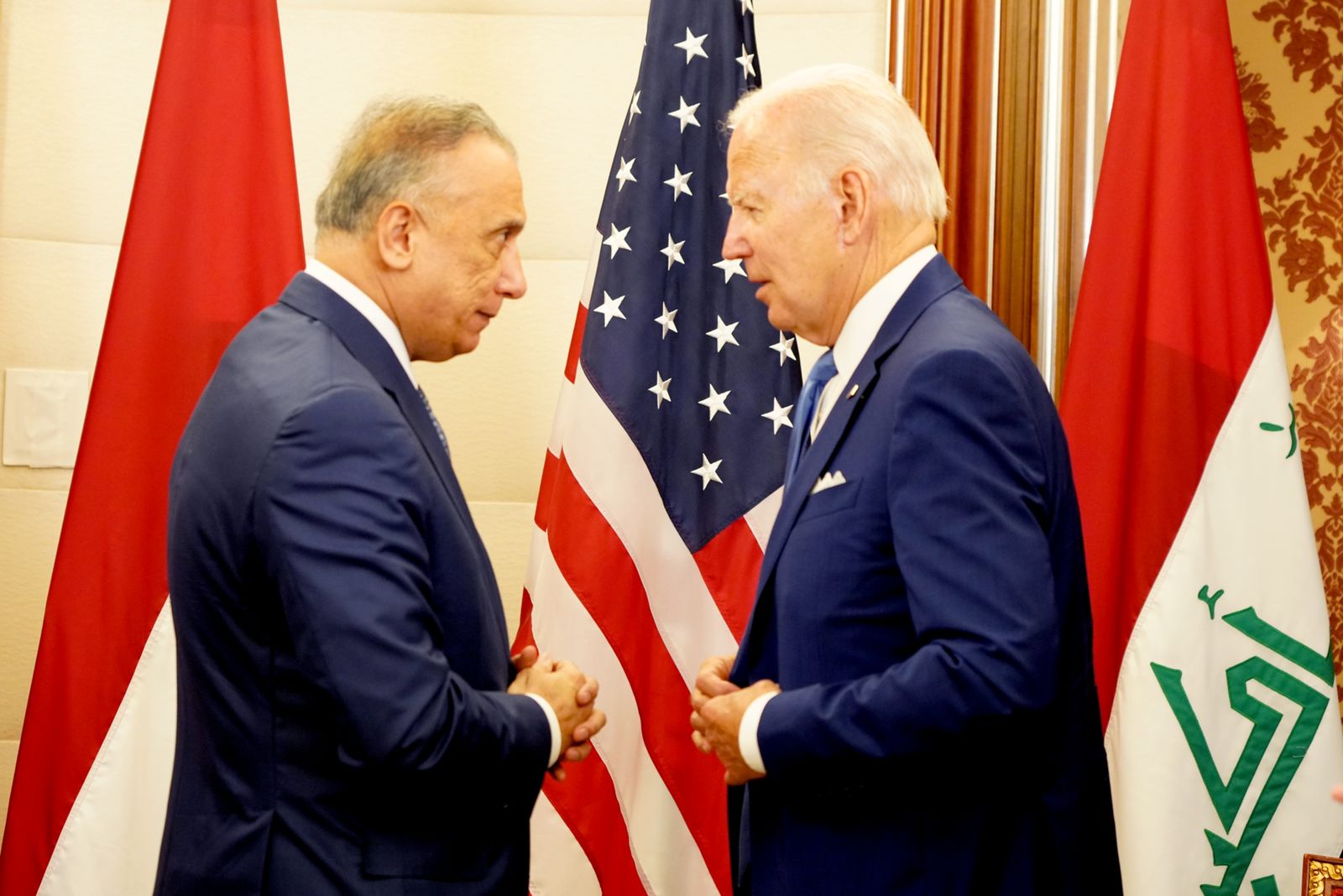 Shafaq News/ US President Joe Biden met today, Saturday, with Iraq's caretaker Prime Minister, Mustafa al-Kadhimi, in Jeddah, Saudi Arabia, in a bilateral meeting during the Summit of the United States and the Gulf Cooperation Council and Egypt, Iraq, and Jordan.

According to a joint statement following the meeting, the two leaders reaffirmed "their shared commitment to the strong bilateral partnership between Iraq and the United States under the Strategic Framework Agreement and their determination to continue security coordination to ensure that ISIS can never resurge."

"President Biden and Prime Minister al-Kadhimi also consulted on a range of regional issues. The leaders agreed that the relationship between the U.S. and Iraq is based on a shared interest in Iraq’s sovereignty, territorial integrity, security, and stability, and committed to bolstering the bilateral partnership for the benefit of their two nations," the statement said.

The pair reaffirmed the importance of forming a new Iraqi government "responsive to the will of the Iraqi people and their respect for Iraq’s democracy and independence."

President Biden underscored the importance the United States places on "a stable, united, sovereign, and prosperous Iraq, to include Iraq’s Kurdistan region."

Biden and al-Kadhimi renewed their commitment to the Strategic Framework Agreement for a "Relationship of Friendship and Cooperation between the United States and the Republic of Iraq, which guides the overall political, economic, cultural, and security relationship between the two countries."

President Biden reiterated his support to Iraq in its fight against terrorism and emphasized that "a strong Iraq capable of self-defense is essential for achieving stability in the region."

The President and the Prime Minister also reinforced the importance of strengthening Iraq’s democratic institutions, to include empowering Iraqi security forces, to advance security and stability in Iraq and the region.

President Biden expressed appreciation for Iraq’s efforts to repatriate and rehabilitate Iraqi families and children as well as to prosecute Iraqi ISIS fighters from Syria and welcomed further cooperation to address this critical issue.

Both leaders agreed that close cooperation on military and security issues and overall support for Iraq against terrorism was critical to ensure the enduring defeat of ISIS.

The meeting highlighted the important role of Iraq in the region, especially in facilitating communication and building confidence among the countries of the region.

The US president particularly commended the significant diplomatic efforts led by Prime Minister al-Kadhimi to foster a more stable, prosperous, and interconnected region.

"The historic new agreements between Iraq and the GCC Interconnection Authority will bring affordable energy to Iraq and help meet the needs of the Iraqi people," Biden said.

President Biden reaffirmed the importance to the United States of building a prosperous and diversified economy in Iraq that is integrated in the regional and global economic system and capable of meeting the essential needs of the Iraqi people. The President and the Prime Minister highlighted the importance of fighting corruption to both build public trust in Iraqi institutions and to support economic growth.

Al-Kadhimi and Biden exchanged views on the efforts to collectively advance sustainable development of the region’s resources, to address the impacts of climate change including water insecurity, and to expand U.S.-Iraq coordination on energy modernization and economic reform.

The President expressed his appreciation for the Prime Minister’s forward-thinking diplomacy in the interest of a safer, more stable region. He also commended the Baghdad Summit, and the unique relationship between Iraq, Jordan, and Egypt, which the United States stands ready to support.

Prime Minister al-Kadhimi emphasized his commitment to pursuing initiatives to bring together Iraq’s neighbors and friends to find home-grown solutions for regional challenges and to achieve sustainable stability.

Al-Kadhimi meets with Biden behind the closed doors