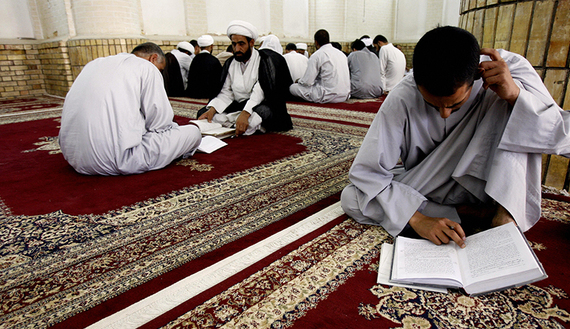 Shafaq News/ Many Afghans from the Hazara ethnic minority studying in Iraq's city of Najaf watched in terror as their homeland fell back into Taliban hands.

And while they feel safe for now, they fear for their families back home -- and for their own safety should they ever return.

Millions of Shiite pilgrims come each year to Najaf to mourn the death of the Prophet Mohammed's son-in-law Ali, whose mausoleum stands in the old city.

Others, like Sheikh Ali Bassir, 51, have spent years studying at the prestigious seminary that trains Shiite clergy.

"I wanted to serve the people of Afghanistan so much, I want to go back, but the situation isn't normal," Bassir says, surrounded by shelves bearing copies of the Koran while a ceiling fan turns above.

His serene smile turns wooden as he considers the fate of the Hazara people, who make up between 10 and 20 percent of Afghanistan's 38 million people and have been long persecuted for their faith in a country riven by deep divisions.

With the Taliban back in control since last month, the majority Shiite Muslim group is worried the Sunni hardliners may again turn on them -- just as happened during the Taliban's previous 1996-2001 rule.

Thousands of Hazaras were believed to have been slaughtered by the militants.

Images of the destruction of two massive Buddha statues carved into a cliff in the largely Hazara province of Bamiyan went around the world in March 2001.

Just days after the Taliban's return, the statue of a prominent Hazara leader in Bamiyan was decapitated.

Many Afghans and the international community still remember the Hazaras' brutal treatment at the hands of the Taliban.

"My brother and sister are in Afghanistan. They're far from the capital, in the countryside, thank God. They're well," says Bassir.

But he adds that he is "afraid of how the Taliban will take control over the Shiites," showing a video on his phone of fighters violently putting down a demonstration he says was made up of Hazaras.

Throughout the centuries, the group has been subjected to slavery, religious and economic persecution, as well as forced displacement.

By some estimates, nearly half of the Hazara population was wiped out in the late 19th century, with many later enslaved during the conquest of their traditional homeland by Pashtuns, the country's biggest ethnic group.

Sunni extremists continued to target Hazaras in attacks even after the US-led invasion in 2001.

In May, 50 people were killed near a girls' school in a mostly Hazara district of Kabul.

No group claimed responsibility for the attack, but it was widely blamed on the Islamic State group's Afghanistan chapter.

Bassir's 21-year-old son Mustafa listens intently from the corner of his father's study.

An Afghan national, he feels "Iraqi at heart" after being born and raised there.

Even in another country riven by 40 years of war, "I prefer to stay in Najaf, it's safer," he says in fluent, locally accented Arabic.

"My mother, my sister and my wife are still there," he says. "I'm very afraid for them... a woman can't leave her home any longer without her husband."

But "we have no idea how to get a visa or even a passport" for travel, Taqi says, as "there is no state anymore" in Afghanistan.

But he says that for now "the situation means students can't go and spread their message".

He would nevertheless gladly obey if the Shiite authorities in Najaf gave the order, declaring that "we have to go if it's possible".